The Eyes have it! 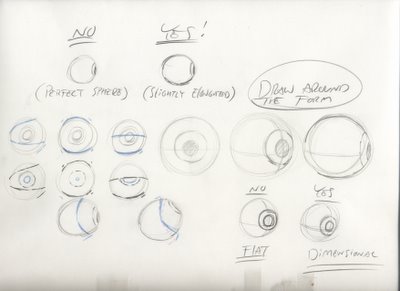 Finally, I'm good to my word! The eye tutorial is here! I was gonna cover the entire face, but i thought the eye's have plenty to talk about for one post.
I really feel like there are very few people who really take advantage of the eyes in hand drawn animation. I feel like i see a lot more CG stuff where the eyes are used to there full advantage than i see in hand drawn. I think perhaps it's because people don't necessarily know what they are capable of. We've heard this qoute that "the eyes are the window into the soul." It's so true, the first thing we look at on other people is there eyes. It's located in a social triangle. Imagine a triangle between the eyes and mouth. everything within that triangle is the first thing we look at to read what someone is feeling or thinking. Therefore it is of utmost importance that this be dead on when we are performing our shots.
Shape: The shape of an eye ball is interesting. I think because very few of us have actually seen our entire eye ball we assume it's a perfect sphere. It isn't, it is slightly elongated (check out the drawing in the top left). This affect's the eye lids-- there's is enough friction between the eye ball and the eye lid that when looking up or down the eye lid is pulled in either direction. Also, when drawing eye's treat them like you would the sphere of the skull. Draw around the form... you see a lot of flat looking pupils and cornia's in handdrawn animation. especially when it is turning. don't forget to draw around that form just as you would the sphere for the skull.
Movement: Eye's typically move very very quickly... this is comely called eye darts in animation. The reason your eyes dart around in the socket so quickly is because of the types of muscles you have behind your eye rotating it. They are very short muscle, so when the contract, they contract quickly and move your eye rapidly. There are cases when you don't want it so rapid, like if a character is inspecting something thuroughly. Generally, i find that using eye darts at the right time for the right reasons makes the character look like he's thinking. there is a great shot in Dreamworks' "Sinbad" that James Baxter did of Sinbad behind a door thinking about what he's going to say to this girl. Check it out, it's pretty incredible stuff.
Eye Lids and Pupils: Eye lids and pupils are also slightly forgotten elements in facial animation. They both are key to expression. check out the drawing above and look at the set of drawings with just the eye lids minipulated. Works ok, BUT, then check out the drawings with the pupils minipulated. MUCH better... more effective. I did i shot in Curious George of the character Ivan. He's a doorman/security gaurd of the apartment complex the man in the yellow hat lives in. the apartment doesn't allow pets, and Ivan whom takes his job way too seriously can smell a pet from a mile away. There is a shot of Ivan where he can smell George through the vent, I used the pupils very intentionally in this shot to add to what Ivan was thinking but ALSO to portray WHO he is. This guy is like a robot, his job is everything to him. He's mechanical in his movent, very stiff, so i did a sorta cyborgish thing with the pupils. I made them dialate for 2 frames (overshooting) and then shrink until they where dots. It was very affective...
Anyhow, speaking of Curious George the wrap parties tonight so i need to get back to work before i leave. Next week, in honor of the films debut i'll post a review and maybe a pencil test or two from the film since they've already realeased some footage online. until then, have a great weekend!
Posted by Matt Williames at 11:31 AM

I went and watched that Sinbad scene you mentioned. James Baxter doesn't joke around. Really great subtle stuff. Thanks for pointing that out.

the dudes a master-- no way around it!

I love your tutorials.
come visit everyday reading your blog hleps me alot.
Please posting the great stuffs and god bless you. :)

Thanks for sharing the information

Thanks for sharing the information

This article is interesting and useful