Sorry for the delay on this post everyone! Blogger wouldn't let me upload pictures for the longest time, but now it's all figured out!

Now that you've all had a chance to look at the rough piece of animation, i'll go through how exactly i came to that point in the process. I mentioned that a turn-around is ideal to put behind you on your disc to flip from for refrence of model. I did up a quick turn around for anyone who wasn't sure what one was. I also did a quick version of a short hand drawing. This is a very useful device to employ when your roughing something out. It's a very loose version of the final design. It's just to get the expression in and block out the volumes. You can really burn through footage fast when you have a short hand version of your character to draw which brings me to my first point of roughing out a shot: LOOSEN UP! 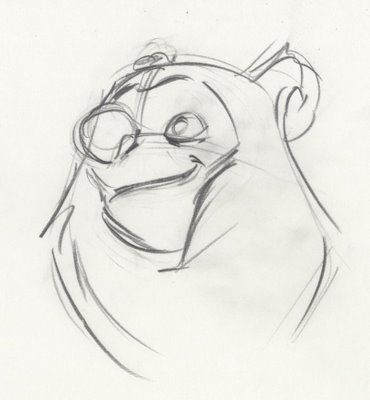 This is NOT the stage for making pretty drawings yet. Personally i think that roughs are quite beautiful when done well and with honesty. Here are things you should not be overly concerned with at this stage of the process: details like hair, nostrils, nuanced facial animation, eye darts, perfecting the dialogue, every single wrinkle in the clothing and every single inbetween. What you SHOULD be focusing on is: performance, gestural drawing, rhythm, consistant purportions, flow, and, you guessed it, performance!!! oh yeah, did i mention performance? It's important to think about your animation in a certain way. I believe this can some up what we do, animate feelings! Meaning, don't think "ok i gotta pick up the leg, move it here"--- naw naw naw, C'mon! animate feelings man! Yes, mechanics: spacing, arcs, on-model drawing contribute to good performance but they are merely a support FOR the performance. I personally feel this way, without great mechanics you can't communicate your great performance properly and yet if your animation is wonky because you don't understand good technique i think it could potentially pull someone out of the performance. Likewise a beautifully animated character from a technical stand-point only tickles the brain, not touch the heart. So while you need to be mindful to a degree at this stage of the process of techincal things, your main goal is making that funny little character breath and live. This is why most people work pretty rough at this stage-- I will admit that these ruffs of mine are a bit more complete than i usually do, but this time around it felt right. I work loosely because your first pass is like trying to capture the essence of the emotion of the scene. The essence of something is the core, all things shed off-- kinda like a quick sketch. 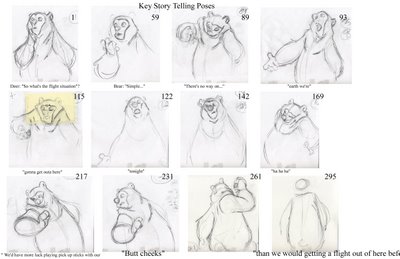 So, step one: Find your story-telling poses. This is always your first step. Finding those poses that will tell the audience what your character is thinking and feeling. You should have done this to a degree already in your thumbnailing process, but everyone works differently and there's no telling how you'll come to that final pose. Sometimes i thumbnail everything out, and then spontinaeously i find something better as i'm roughing it out and then don't even use my thumbnails. Or sometimes I just stick exactly to what i thumbnailed. it's always different. So, i guess the point in all that is to allow for spontinaeous moments but also it's wise to have a pretty clear idea of what your shot is to be eventually. Make sense? How you get there can and will change from shot to shot.
So basically you have your rough poses... and as you can see in the pics they are pretty far apart time wise:frm 1 to frm 59. I call these anchor drawings... they are starting and stopping points, but a lot needs to happen inbetween them. For example, from 1 to 59 the character is just listening to another character say "So what's the flight situation". I have a lot planned for this but i will not execute it untill tie down. Things like breathing, looking around and such. The main thing is to not draw too much attention to himself just yet-- whenever another character is talking and in the same frame (as there will be eventually hence the nudge pose at the end of the shot) you keep the other character "alive" but subdued. I really like using eye darts and breathing for thinking (which you won't see until tie-down). That's all this character is doing at this point, he's thinking about their situation. Thus he hits a brewing point and at frm. 59 lets out the word "simple".
Something else i look for is when an actor takes breath's in their performance, i know i mentioned it for thinking moments but i just plain like it in performances too. It helps give you the sense that the character is alive. It's easy to over-do so you gotta be careful with how much you use it but i like to try and build them into the performances on a consistant basis.
So you hit up all your main story telling keys, roughly time them and then move on to filling it all out a bit. 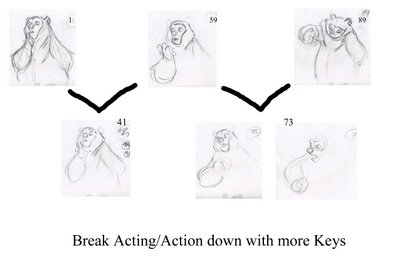 The next step is to break down your anchor keys with some other keys. This is where you build in arcs, breathing, extra thinking poses, head turns. Basically flesh it out-- you really need to be planning ahead for what your eventually going to tie down. Ultimately it's the performance your after but if something is so indecernable (a.k.a so stinking rough and off-model) that you are having an impossible time tying it down maybe you ought to complete your ruffs a little more before you go to tie down. everyones different of course, but i know I've learned a lot from this phrase "Value your ruffs". It's a Glen Keane term not surprisingly-- Some animators treat their ruffs as a means to an end... no no no no, ruffs are an art unto themselves! why do you thinkeveryone loves a good Glen Keane ruff... it's his heart and soul that's why! I digress!

So basically all your doing from here on out the end of the first pass is fleshing things out a bit. You dont want to waiste your time on details that don't matter yet, but you do want to give enough information to tell your director what the shot will eventually look like.

Incidentally, the sooner you can get some numbers going on your animation (i.e timing) the better!

Okee doke peoples! That's it for now-- i do plan on taking a little break from this online teaching stuff for a little bit since it's gonna take me a long time to tie this stuff down on top of work and stuff. So, i might post here and there about some other stuff but rest assured i will finish this series. Looking forward to completing it! take it easy!

Posted by Matt Williames at 9:43 PM

Thanks for the update, this post made the light bulb click ver my head on timing and x-sheets.

yeahbaby3006 said...
This comment has been removed by a blog administrator.
12:15 AM

we are watching matt's posts with no blink at all...

thank you for your teaching, it 's really helpfull to see the work growing step by step with explanation...

great info once again Matt just love that your going through this step by step take care!!!

This is great, thanks for the off-season instruction Matt. Steve's bear was my favorite character in the entire open show.

Kev- no problem, sometimes it helps to see others do it.
Maninflash- I can't say that everytime i do something like "opposing forces" i am always conscious of it. Sometimes i am when i know i need to put it in somewhere. The goal is to become so familiar with drawing and the technical side of animation that you don't think about it and it just becomes second nature while you animate.
Akinya- please blink :), it could be a while before the next post in this series!
Louis and St. John: my pleasure!
Ian: My pleasure. Your film rocked by the way-- was definately one of my favorites from last year. and yeah, Steves got a lot to offer as an artist. His ideas are so fresh!

Great stuff Matt, this is golden info on the process of animating, it's greatly appreciated! I look forward to the next lesson :)

This is great! nice and generous info about animating process.Keep up the great work!!

Doing a great job Matt. This is really engaging.

I was wondering if you could talk about how/what you used to lift the audio for this, and how you exposed it. Would love to see Scans of your X-sheets for this animation, would be a good Visual Aid.

Keep up the great work, just love reading this.

Your tips are really helpful. Thanks for posting, and keep it up!

Hey thanx Andy,Daniel, Corey! i like knowing everyones getting something out of it! Sometimes it just helps to see someone do it, ya know? James Baxter came and animated for us while i was a student at CalArts- seeing someone like him animate really made some lights turn on for me.
Omnigon: I'll be sure to scan my X-sheet in for all of your to see in the near future!

i'm really enjoying these posts. i', looking forward to the next ones.

I love to see you sharing the knowledge, animation is a tough one. I am constantly trying to get better and your site will be helpful to any animator indeed. The first time I was told to make my character breathe was an eye opener for sure and is great advise. Can't wait to see more.

That bear of yours is awesome, I love it. Congratulations for a great job!

Willi: good to see you back at the blog and i'm glad your enjoying it!Joto: I'm glad your getting something form this too! I'm only passing on stuff others have taught me! I'm a firm believer in mentorship because a lot of animators AREN'T! it's a shame--
noelia: this bear isn't my design actually-- i am borrowing him from my talented friend Steve Macleod of www.clockroom.blogspot.com fame!