Gestures: The Revenge of the Tutorials

I've gotten a few request recently to start doing more tutorials again! I had stopped doing them cuz no one, except my friend Steven MacLeod www.clockroom.blogspot.com was responding to the posts. but i am very happy to start some up again! the first request i got was to talk about gestures. Everyone ought to check out what Andrew Gordon wrote on his site about gestures, it's pretty good stuff. I thought it was funny i got asked to write about draftsmenship cuz it's what i consider to be the weakest part of my animation. Soooo, we will not be looking at any of my drawings today that's for sure. today we study KING KAHL! The main point of your gesture is to tell someone something! It is meant to reveal how the character is feeling on the inside. Sometimes you down play things, sometimes your over play them, it all depends on the scene you have and who the character is. Milt is famous for his draftsmenship amoung other things, and all of his poses are crystal clear. shapewise and storywise. I HIGHLY recommend stop framing anything he touched. I think Sher Kahn is a great example of underplaying. Milt, in some scenes hardly moved him at all even though the dialogue seemed to be doing more. He was underplaying the character... he was confident enough in lingering on a facial expression of using the eyes that he didn't feel the need to use these broad poses. but them there is Madusa who is overplayed, because it's her character. I picked a few drawings that i thought were amazing gestures for different reasons. 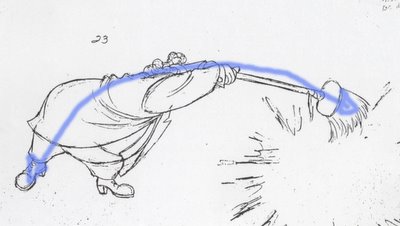 Now, i'm not trying to limit these drawings, i am just pointing out 1 amazing thing about them. Check out the Line of Action. You really feel the power behind that broom, but consider the character as well. Snoops is a sloppy guy, and doesn't really think to far into the future. He's clumsy and a bit stupid, so his gesture reflect a sloppiness to him. a one tract mindedness. 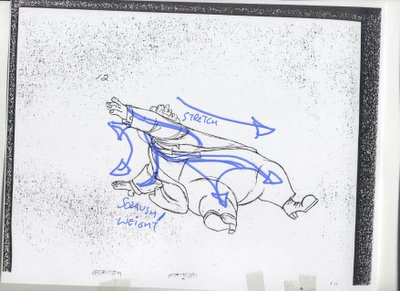 Rythm is basically when shapes are working into the line of action, and each other. another person who does this beautifully, in my estimation is Eric Goldberg. This drawing of Snoops uses rythm to desrcibetwo things: a shifting in weight, and tension. He is obviously turning over (shifting weight), and his arm stretching is the constrast of tension compared to the squash of his arm were all the weight is being transfered too. note though that shapes in into eachother, his arms make an arc as well as his legs. 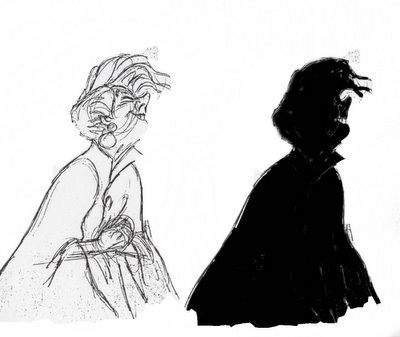 Getting a good gesture is all about clarity... is it clear enough? Glen Keane once told me something that Ollie told him, "it's not about drawings clean, it's about drawing clearly." Silhuette is the test we all use to make sure out poses are reading as simple shapes. This is a beautiful example of such. My advice on finding a good drawing is DON'T BE AFFRAID OR TOO LAZY TO REDRAW SOMETHING. Often times i go through 4 or 5 drawings before i find a good one, maybe that makes me a weaker draftsmen but i think Milt did it to. His results were a bit different than mine are obviously. but experiment, push the pose!

I feel bad compartmentalizing these drawings. There so much beauty to be seen in them that you can't just point out one thing. but for now i guess this'll have to do.

Posted by Matt Williames at 4:14 PM

Now! I'm speechless, thank you so much for your support here...these are so informative ...great to see that you have started your tutorials again...well done. :)
Thanks for them...they really mean it a lot to me...

I just found this blog and love your drawings. Can you give more information about your animal characters? They're for a short you're developing? Or a TV series pitch?

Thanks everyone for posting and the compliments! this is funny for me cuz people are actually posting now on my blog! Yeah, the animal characters you saw are for a short i'm developing, in fact i am in the middle of writting the script as we speak. So, i am hoping to pitch the short to Fredorator Films sometime next year and get the funding to finish it.

These tutorial entries are great stuff.

I just discovered your blog as well and I find it very inspiring and interesting. I like the animals quite a bit, and it is nice to see that not everyone is hopp'n on the 3D bandwagon. What is your method for the illustrations? all comp? all hand drawn? Keep postin and I'l keep reading and I know I'm not the only one, there are a lot more of us out there who appreciate you guys taking the time to share your discoveries. Thanks!

Vin- I guess i don't know what a comp is so i'm just gonna say all hand drawn. Yeah, i'm holding out to stay in hand drawn as long as i can. It feels like CG is a train, and i'm on the tracks waiting for it to barrel me over. Like a game of chicken. So lets hope my future in hand drawn is long and drawn out. ha! no pun intended... i think i just lost about 8 friends cuz of that joke

hi,
I a currently studing the art of animation and my faculty always tells me that my lines are strong but i am not able to understand the meaning of the same.could u tell waht that mean.I tried to ask me but he only tells me to practice more.Pls suggest me the way to know wht really is wrong with me.
Thank u
Abhi

abhinab, I'm sorry but it is difficult for me to say what your instructors mean by what they said. Maybe post some drawings of yours on your blog and i could look at them and give you a thought?

Matt, You can't spell worth a darn but reading your animation blog is a real treat. ;o)

Your personal experience and insight into traditional animation is a great read. May you blog long and prosper.

Hi there i am kavin, its my first time to commenting anywhere,
when i read this piece of writing i thought i could also create comment due to this
brilliant article.

Hello, just wanted to say, I liked this post. It was helpful.
Keep on posting!

Do you mind if I quote a couple of your articles as long as I provide
credit and sources back to your webpage? My blog site is in the exact same area of interest as yours and my
visitors would certainly benefit from some of the information you provide here.
Please let me know if this alright with you.
Regards!