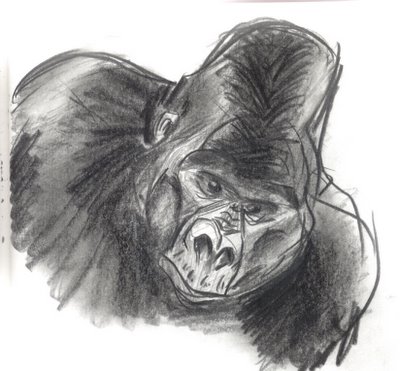 Here's a little development art i did for the film. ha, just kidding. This drawing is actually really old, but i still like it. This post is decidedly about KING KONG. I just recently saw it Friday night, i wanted to see it Wednesday morning at the 12 am showing but it didn't work out. But all i have to say is WOW. i absolutely loved it, in fact, i can't stop talking about it. I know some people are predicting that it won't be a hit, but a movie that costs 207 million to make is hard for it to become to a financial hit. as far as i'm concerned though it is definately an artistic success for sure!
You got to films wanting to feel something. Wanting to have an experience. I felt everything i wanted to feel and that's hard for a fellow filmmaker to get that way because i know it's all fake. It's even harder sometimes for me to take that leap emotionally, but when i film takes even me there i know it's powerful.
Sure, there were somethings i would have done differently, maybe would have trimmed up some spots editing-wise, and yeah, there were even some bits of animation that i thought could have been a tiny bit better. But then, there were WAY more moments that made me go "wow", or feel incredibly sad.
Anyhow, the point of it all is GO SEE IT. You don't even feel the 3 hours. honestly, your just sucked into it.
Posted by Matt Williames at 11:20 AM 20 comments

Finally! some time to write!

Ahhhh, finally a little time to write! Sometimes life can be all consuming unfortunately. It can be difficult to keep a good balance. especially when your an animator. It seems that there's always time to fix animation, but never time to do it right on the first try. I have been back at warner brothers working on this looney tunes christmas special thing. most of it is being animated in Korea, but we're keeping a few shots here for us to animate, and posing out some other scenes. It's funny, as a kid i never liked drawing the looney tunes. I always liked the disney stuff the best, and i still do i guess. But i can't tell you what i've learned from doing the warners stuff. Someone once accused those characters as being "easy" to draw. they obviously never has drawn them himself. Yeah, there are tougher characters, but you try it. Some of them are hard! Mainly Bugs, Daffy' s a little easier, but bugs is a booger. The thing that you learn when drawing and animating these characters is that emotion dictates the design. these characters are all about good design. They really teach you to loosen up and have fun with the design. Pushing it, pulling it, caricaturing it. And frankly, that's what animation is best at. Not that Prince of Eygpt live action crap. Yeah, some of it was beautifully animated, and well performed, but i don't think anyone liked drawing that stuff. It has very little, to NO appeal. these characters do. So anyway, here's some stuff i've been working on since i last wrote. later everyone! 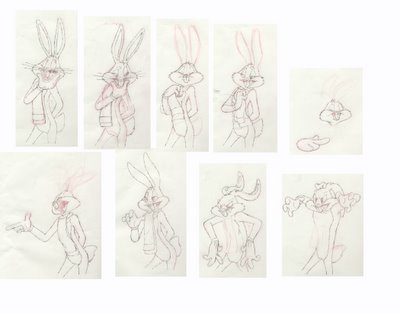 Posted by Matt Williames at 11:26 AM 8 comments