A few people have been bugging me to put up more pencil tests. I've wanted to put up some Curious George stuff, but i figured i'd wait till' it had it's run in the theaters. Just to play it safe. This was a fun shot to do... in retro spect, i would have done some stuff differently but this was done in the crunch of the film and i didn't have a lot of "searching time". I only had a week to do it and it's mostly on 1's as you can see. I think it turned out ok, but as we learn and grow our work just seems to get dated huh? at least mine feels that way to me. Whenever I can, I love to move the character in and out of the foreground. We as hand drawn animators already have the challenge of making people forget about the fact that they are watching drawings so this depth can help with it. CG has had a positive affect i think in this way that they have forced us not to cheat. CG can obviously do all the technical stuff automatically, but in handdrawn it takes real skill to do these things. I think CG has forced us to not fudge anything to keep up... personally i think it has been a good thing.
On another note i got my copy of King Kong! I'm one of those types who watches DVD's, or rather listens to them as he works. I get a little obsessive about new films. Especially ones from directors and studio i highly respect. The same has been true of watching King Kong. I know the reaction was kinda mixed, but i loved it and still do now. That T-Rex fight is pretty freaking amazing man-- geez, talk about clear staging and knowing where you are from cut to cut. Those guys know what they're doing that's for sure. but for anyone who knows me knows i am a sucker for the tender parts even more so... i can't get any work done when those parts come on man. I just have to abandon myself to it, get sucked into it, and start to feel something. Maybe someday i'll get that chance to animate something really tender, as well as some kick boot-tay action sequence!
This kinda brings me to another thought that i've shared repeatedly. I wanna see hand drawn animation do something like this again. I think Iron Giant had a lot of what i'm talking about... heartfelt moments (the climax of the film), cool action stuff (when the Giant goes bazurk!) and fun humor (playing in the lake). Oh PLEASE Brad, come here and make Ray Gunn. You gotta man!!
Anyhow, enjoy the pencil test and have a great weekend everyone!
Posted by Matt Williames at 12:54 PM 18 comments 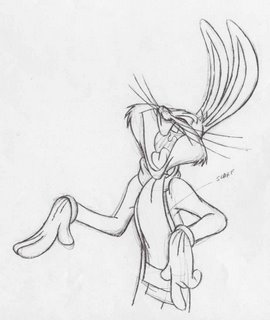 I few people have asked me about the last pencil test i posted... they've asked a similar question. "Why do you have the eyes change shape so drastically?" well, for starters in order to see any change of emotion or attitude, change is required. I think it was Milt who said animation is all about change followed by some expletives. but also cuz it fits the style-- emotion dictates the design with this particular style i am going for. I learned this from Frank Molieri! The greatest animator you've never heard of before. I met Frank back on Looney Tunes: Back in Action. Frank, i believe is one of the most gifted draftsmen i've ever met. and nobody knows who he is because he's never worked at Disney or Dreamworks... but i assure you he can draw better than most those guys, not to mention he's been like an "animation older brother" to me. when everyone was freaking out about the so called "death" of hand drawn animation, who was staying cool and calm and helping me out as much as he could, Frank! That guy has done more for me than many artists. This is turning into a tribute instead of what i intended-- anyway, frank is awesome and worthy of respect. So like i said, Frank really taught me about how to play with shapes. I've put in some example here that Frank did of bugs (i can't think of anyone who draws him better). Look at the graphic quality to his drawings... he does things that aren't necessarily "natural" or "real", but he makes you believe it. 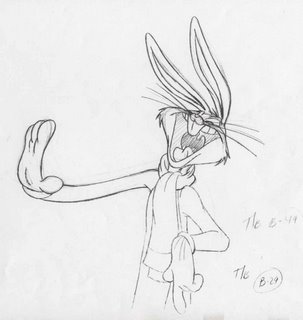 Look at what he did to the over all shape of the head... it's just a simple shape dictated by the emotion. Also note the cool Fleischer arm! 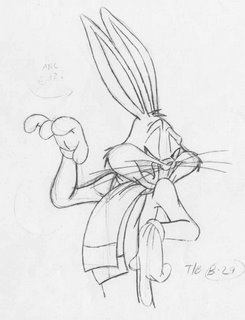 Notice how the eyes are skewed here... and the shape of the eye lids. so freaking beautiful. oh yeah, and clear hand shapes... 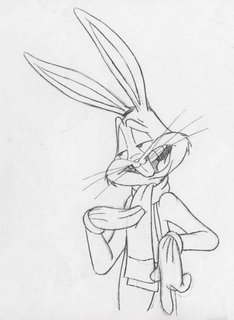 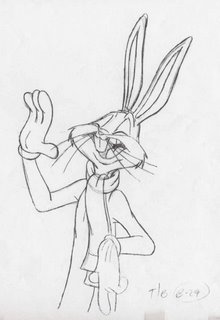 Yep Franks amazing-- oh i forgot, look at the mouth of the drawing on the top, he's totally breaking the rules. I love it man! Hopefully i should be able to finish up the last pencil test (there's still another half of it to go) and i'll post it for you all!
Posted by Matt Williames at 1:10 PM 22 comments 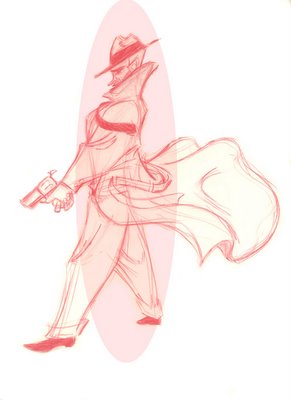 Hi everybody! it's Friday baby! but not just any ol' friday! It's my birthday... yes, it is this day 24 years ago that i came out of my mother holding a pencil. Oooh, ouch! She still doesn't like me holding pencils in front of her... makes her nervous.
It's just been a lot of the same old same old for me this week. Waaaaay busy trying to get my portfolio all finished. I was editing my reel and decided i needed one more good acting shot, so i have taken it on myself to animate about a 12 foot shot in a week!! it's been nuts trying balance everything, but God is gracious and gives as we need, not to mention my wife is gracious too!
So here's a piece i did for the character design portion of my portfolio. I really am fascinated with the film noir genre: detective movies and stuff. So i was drawing this detective character. It actually made me think of Ray Gunn, Brad Birds baby. He pitched that thing down here way before Incredibles but no one wanted to do it because of the fact that it WAS film noir and they thought audiences wouldn't go for it. but like most everything, if it's handled with balance and sincerity i think the audience feels and believes it. plus, ummmm, it's Brad! So here's to you Brad, please come down here and make that movie!!
So until next Wednesday which'll be the day before i go up to Pixar to visit a friend and see what's happening. If i can, i'll take pictures and post'em and narrate through my Pixarian adventure! Willermess out!
Posted by Matt Williames at 12:30 PM 25 comments