* NOTE TO VIEWERS: THIS ANIMATION IS NOT PLAYING AT THE CORRECT FRAME RATE. CHECK BACK SOON TO SEE IF YOU I GOT IT FIXED!*
Everyone who has a blog needs to look at their sitemeter and track who's been to your blog. I just recently started doing this and it is SO fascinating who's been here! it doesn't give names but it does give countries, cities and sometimes even company names. Last week people from Disney, Dreamworks, ILM, Pixar, Germany, Peru, Nepal, and even Iran were on this site! pretty crazy, i forget that this is accessable to the entire world. literally! Go check out who's been looking at your work!
Sooooo,you all are going to kill me, or stop visiting my blog but i am affraid this post will not be about roughing out your scenes. I have been thinking long and hard about it and have come to a dicision about how to show everyone what i am talking about. I am just gonna animate something for everyone. I am gonna walk everyone through the steps of how i particularly animate a shot from thumbnails to finished inbetweened tie downs. the reasons for this are multiple. I got a little work, praise God! but more over i will be gone for about 2 and a half weeks starting tuesday and unable to post on the blog.
What i thought i'd do is show everyone this finished bit of animation i did for my reel. I posted the half finished version but never showed the entire thing. this is now considered an old test by me, and the characters model has changed. I didn't have him quite nailed down at this piont. There are bigger oops's but i don't need to piont them all out do i? I hope you all enjoy this. I'll be sure to post one last time before i leave on Tuesday. Until then, have a great two weeks!

Geeking out to the max!

Here's a little drawing Glen did in my "Art of Tarzan" book for me on the day i visited the studio. The note says " To Matt, Keep persuing your goal. God Bless you as you do" 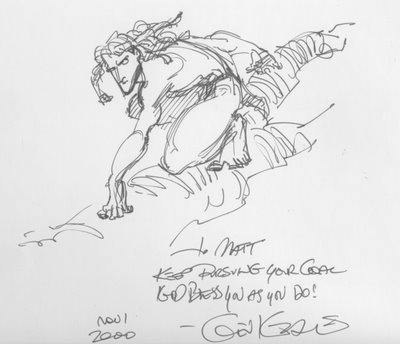 I haven't done a lot of geeking out on this blog, i figured while i try to think through what it is i want to say about ruffing out a scene i'd put up some cool drawings from some of my influences.
This first one is from Glen Keane. Glen was my foremost influence in my youth- i've known who that guy was since i was 8! His passion for this artform always was contageous, even from 2000 miles away. anyhow, i had never met him until i was 18. I was in my frist year at CalArts, and anyone who knew me knew i was a Keane nut. in fact, Max, Glen's son was in my class and was even in my cubical. I didn't get to know him too well, he left after 2 months. anyhow, i got the opportunaty to meet Glen in my 1st semester of being at CalArts. I packed all my portfolio stuff up perfectly, had it all arranged: quick sketches, life drawings and then everything else.
I got the Disney and waited down in the lobby for Glen's secretary to some and meet me. It was the first moment that i thought maybe this guys not what i think he is. I mean, i've met a lot of the guys considered to be "the greats" of our day and unfortunately not all of them are admireable people. I started to get nervous that maybe my childhood hero was not Santa but Satan! well, maybe not Satan. I picked up my stuff and went with Penelope (Glen's secretary) up the his office. She was super sweet, offered my some coffee and told me i have to wait for a while until Glen was ready. We rounded the corner and Glen was waiting for us-- I was relieved, he was actually santa claus! My memory kinda blanked out for a bit, i remember being really thirsty and sweaty all of the sudden. beyond that i recall him being extremely gracious and giving of his time. before he even opened up my portfolio he asked me a bunch of questions about me, where i'm from, what kind of artwork do i like. He made me feel like he was actually interested in me and my growth as an artist and a person. He proceeded to open my portfolio and slowly go through it page by page. I've never wanted a pair of diapers more than at that moment. It was gut renching- but he was gracious... VERRRRY gracious. He encouraged me, told me what he liked, didn't like and then proceeded to show me what he had been doing. He pulled out a sketchbook and started flipping through it page by page telling me stories about these people he'd see at the park or whatever. It was thuroughly inspiring to a young lad- He then shut his door and went to his computer and pulled up the sequence from Treasure Planet he was working on. It was the first time we see Silver in the kitchen. I was blown away-- i remember trying so hard to memorize everything because i knew i wouldn't have this happen again.
Then all of the sudden Johnny Resnick from the Goo Goo Dolls walked in with the producer of the film and i was swiftly ushered out by Glen's secretary(and understandably so). While Glen was talking with them I got a tour of the other animators office. Even though it was all a thrill for a young guy, my mind was still on all of those beautiful drawings in Glen sketchbook and walls. Well, the tour was over and i started to make my way out of the building and I heard "Matt, hey Matt!" It was Glen at the foot of an animators office signaling me to come in. I was sure he was talking to another Matt in the room, but i thought i'd better get in there before that other Matt did! I went into the office and proceeded to watch Glen critique an animators work, Bert Kliens in this case. Little did i know that Bert would hire me just a year later for Looney Tunes: Back in Action.
All in all it was a memorable day- even just thinking about it is inspiring enough for me right now. The next post will definately be the long awaited "1st pass" tutorial. until then take it easy!
Matt
Posted by Matt Williames at 12:33 PM 24 comments