Have been pretty busy between working freelance and trying to get this shot tied down-- i knew it'd be a while until i would get it complete which is the way i wanted to present it, but i thought i owed it to everyone to show where it's at as of right now.
As far as critique, the one change i am going to make is a little bit of lip sync stuff arounf the "get outta here". Fast dialgoue can be tricky- and where i put the blink on the word "simple", i feel takes away from his expression and the sorta of "eureka" feeling i wanted, like, he's think "well isn't it obvious". I feel like taking the blink out, and closing the eyes before the accent on the I of "simple" and the overshooting them will give me a more truthful performance. so anyway, check it out and stay tuned!
Posted by Matt Williames at 1:02 PM 28 comments 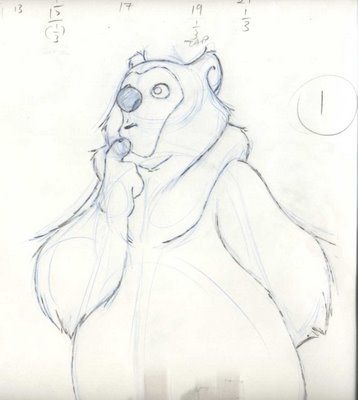 Hey everybody! The tie down is coming i promise-- this ones gonna take some time though! I'll do my best to post what and when i can but haven't had much to say yet. but believe me i will once i can show ya'll this tie down version! hang in there everybody and we'll see ya on the next post!
Posted by Matt Williames at 5:07 PM 31 comments

I've had a lot of time to sit around and think about what i might not have covered in the last few posts on animating a shot, so i've come to a boiling point now and i think i'm ready to spew out some thoughts.
Here's a debateable topic: Animate with lightbox on or off? As with MANY things in the process of animating this is what i've learned, EVERYONE DOES IT DIFFERENTLY! James Baxter animates with it on, others like John Pomeroy animate with it off. not all the time i'm sure, but that's at least what i've witnessed these 2 do. and yet, they are both great. answer... it's up to you- it's good to know the pro's and cons for having it on all the time.
PRO'S:
easy to track spacing
helps with keeping volumes
helps keep a good context in your mind of where you are

CONS:
Sometimes your drawings can get kinda flat
you stop flipping
things start to become mechanical

Me, i animate with it on most of the time, but, i always have my lamp angled "just so",so i can focus on the drawing i have on the pegs a little better. Like i said, it's seems to me that everyone does it differently.

Spacing: Here's an interesting subject that i'll cover more once i delve into tie down more, but spacing is something i've discovered few animators understand even though it's the difference between weight and no weight, laugh or no laugh in a scene. It's very technical but once you understand it you can start using it artistically. The bottom line for me and spacing is mostly about "where to put what", meaning, where do i use half's and where do i use thirds. It'snot easily explained, but i'll say this. Anytime you are slowing in and slowing out i typically use a 3rd on the very last inbetween to the key drawings. however if a character is slowing down but not to a complete stop and then progresses to speed up i will just use halfs. confused-- don't worry about it, i'll explain more later.

Ahhhh, here's a frustrating one! KEEP IT SIMPLE STUPID! Everyone in animation knows this K.I.S.S. things. I think this is the critique i've heard more from animators i respect than any other critique. As animators we kinda wanna impress, ya know? show all our amazing "skills" to qoute Napoleon... but it's really a matter or being confident enough NOT to do something fancy to linger on a pose. I have found that this for me is atough line to draw sometimes. You can go too far in any direction really.... "if i hold it back too much, it'll have no nuance. If i don't simplify enough my poses won't read." Unfortunately there is no answer-- it's case dependsant, but the answer for each scene revolves around what the point of the shot is. and believe me you guys, i'm preaching to myself! If the scene benefits from those eye darts your throwing in there, then great, but if it's distracting then take'em out no matter how well executed they are. Something i heard alot from Tony Derosa was "work within the pose". I used to get confused cuz his stuff would seem so boiled down to me-- and THAT'S the point! He boils things down to their essence and works within the poses. working within the pose can be anything the character does while in the pose (head shakes, blinks, slight breathing). Look at the stuff on Sher Kahn, Milt could drawing anything and move stuff like no one else, yet, that's the most subtle stuff he ever did! What used to impress me was stuff that moved brilliantly (good weight and such), but now what blows me away is subtle acting that makes you feel something. It's kind of scary really-
Okay, just had to get that off of my chest! I am hoping that the next post can be a continuation of the "tutorial series!". I just finished 2 jobs and actually have time to work on my own stuff. yeah!! take it easy all!
Posted by Matt Williames at 4:39 PM 20 comments