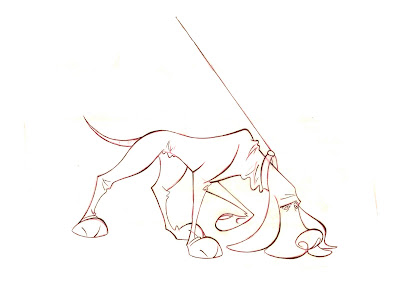 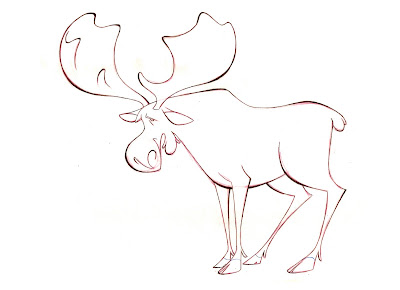 Some more Curious George randomness! The fun thing about designing characters that are only seen once is that they don't always fit into a context. Like these characters are basically cutaways. So, I could basically do whatever I wanted as long as they looked like a dog and a moose.
Went to Siggraph today-- Disney set us animators up there. Was fun accept they wouldn't let me into the Frank and Ollie talk, dangit! Was talking to a few people about traditional animation while I was at the Disney booth. One dude swore to me that Lilo and Stitch was CG. I politely tried to inform him that it was a hand drawn movie. I could see the confusion on his face and it was later confirmed with his comment "but then that would mean you'd have to draw every frame!!". Yup-- just like in 1939. Other favorite qoutes that I either heard or heard of:
"Why don't you guys just use tracing paper?"
(a man walks up with a suit on and a briefcase and says) "I need to talk to John Lasseter".
"Are you sure you want to be drawing in red?"
"how many "animations" do you do in a day?"
Ahhhh man, too funny.
Posted by Matt Williames at 10:10 PM 29 comments