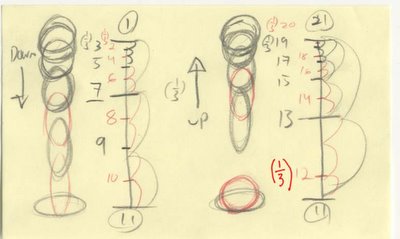 Ahhh, the infamous ball bounce. But there is much to learn from this simple animation exercise. Physically speaking, it's got most of the animation principles rolled up into one test. But today i will focus on spacing, planning for ones, and contact.
Spacing is obviously half of what will or will not make this work. Note that the chart on this ball bounce is not the same for both the "up" and the "down". On the Down I made the dropping slightly more 'even' than the bounce back on the 'up'. It seems to me to feel more natural, and the sharp gap in spacing on the up give the ball a feeling of intention, like it's really trying to bounce. The only problem with the spacing is the gaps. BTW, All lines in graphite are the odd's (on 2's), and the reds and the added inbetweens for ones. Anyway, the gaps on the graphite lines don't overlap. And when things are on 2's and they don't overlap your animation will "strobe". That's when you can see the actually drawings kind of flicker a little. that's bad! So, to fix the problem we need to add ones. This isn't always easy. it's not a matter of simply putting even inbetweens in there, you gotta plan for ones. In this case, because it's a ball bounce, we need the feeling on 'contact' when the ball hits the ground. For this we need at least 2 frames for the contact to read properly. So imagine you just evenly inbetweened this stuff when it went onto ones, you'd lose that 2 frames of squash contact. So what i did was evenly put 10 as a strech drawing touching the ground to avoid strobing and placed 12 as a 3rd to 11 still touching the ground. Thus we maintain the gap of space on the 'up' needed for spring and maintain also the contact we need.
Also here's a little quick sketch i did in collage of some girl soccer players. Just for fun! 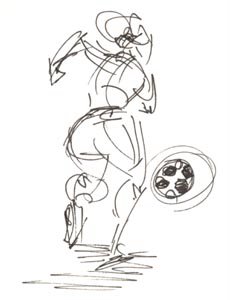 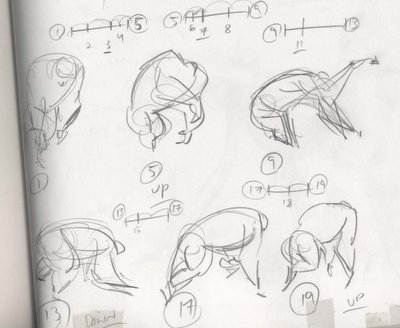 These are some motion analysis doodles i did before i started work on Curious George. Unfortunately i never got the opportunaty to use very many "monkeyisms" in the film... that's something i think the character of George might lack a little. So yeah, i totally recommend anyone going into animation whether CG, stop motion, or hand drawn study relentlessly live action footage. It is our basis from which we caricature... if we don't know what's really then how can we caricature BELIEVEABLE performances. believeable is the word, not realistic. if you want realistic shoot live action. anyhow, i do these as often as i can. and seriously, stop frame everything! study weight distribution, what does the body do to prepare itself to change direction, how long frameage wise will i need for that contact (rule of thumb: for contacting an object with another at least give it 2 frames of contact to read). Recently i've been studying eyes and how the eyes dialate in certain emotions, wrinkles for certain emotions. The face is a fascinatingly complex thing to study. oh by the way, ignore the charts on these pages, they're wrong!
This week was a busy one! we are getting ready to ship out stuff to over seas on monday :(. I am finishing some mouth charts for them right now. they pulled me off from animating to help get these done. Just finished posing out a shot of Daffy falling through a tree and hitting every branch on the way down. Got to hit a lot of fun graphic shapes! hopefully Korea will inbetween in correctly. here's hoping! So i thought i'd actually post a real drawing for once. I've been so busy drawing things that i'm not aloud to post that i haven't have much to share recently. so check out this character design i did. 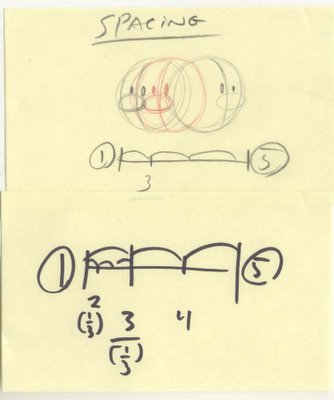 Good evening folks! back here with some more notes on spacing! this is a simple trick that most people know, but some neglect to use. When your doing a head shake, say on 4's, make your inbetween favor the previous key as a 3rd. If you evenly inbetween, it will look mooshy and not have any punch or weight. The more physical explanation is that things need time to start moving and stop moving. Therefore, the excelleration is at it's height on frame 5 (see pic above) which is why the gap of space between3 and 5 is the largest. Now, if you want to put it onto 1's i've added another chart right below to show you how you could transfer that info into 1's while keeping the weight you need.
Work was pretty good today, am doing some shots that require me to more fully plan out stuff. So am basically animating, but were not calling it that because the big wigs at Warners don't like that word!
Has anyone seen the new King King trailer? Pretty flippin' sweet if you ask me! pretty sweet. Seeing stuff like that just maes me LONG for cool projects to grace the face of hand drawn animation. I have enjoyed working on films like Curious George, or Looney Tunes: Back in Action but i have never felt the concern of letting the film down. ya know? i usually feel like i am trying to make so-so ideas work in my animation instead of trying to live up to something. I also LONG for depth. I've heard so much junk about how hand drawn just can't get the facial depth that CG can. Yes, there may not be all the detail that a CG model would have but the depth of performance is just as much a possibility! Just look at Sergio Pablos' Doppler stuff, or James Baxter close ups. Both those guys get sublty... so again, i really long for one really amazing film to grace the face of hand drawn animation. Maybe Brad Bird will eventually do "Ray Gunn" in hand drawn? who knows.
Anyhow, hope everyone enjoys these notes! Someday I'll find time to post more drawings up! cheers!
Posted by Matt Williames at 9:23 PM 9 comments

On Monday i was starting work back at Warners and had a little time to blow till' they got me all set up for work so i decided to drop by my friend Frank Molieri's room. Frank is the best animator i've never heard of before. I met him on LooneyTunes and he's one of these guys that no one has ever heard of before but can draw the cartoony stuff like you wouldn't believe! he's also be an incredible friend to me... i owe him a lot. so anyway, as i like to do i showed Frank some animation i had done from Curious George and some of my own personal stuff. I like showing him cuz he's encouraging, but also very honest. sometimes to the point of bluntness, but i'd rather have it that way that have it sugar coated for sure! anyhow he watched my reel, said a lot of nice things and then made the infamous "but". and i looked at him and saud, "but what". He smiled and looked at me like he had me cornered and was gonna check mate me. He said "Matty, your characters don't breath." It was one of those comments that sorta hits you in a funny way cuz of the truth in it, and the humilation that you haven't thought of it yet because it's SO obvious! There are times in shots were i've thought about making a character take a breath for a pause or something, but it is NOT a usual part of my thinking. I haven't really ever built it into the performance. It's not a litteral rib cage expanding and closing kind of thing, just building into the performance kind of a thing.
The other thing i've really been anxious to study more is eye lids. I've studied eyes quite a bit, but i've really been wanting to get into eye lid stuff. There is so much intricasy to the social triangle (mouth, eyes, eye brows, nose).
Speaking of eye brows, here's something i tend to do when i am animating close ups. The muscles that make your eye brows move up and down and very short, so when they contract it makes a very short quick motion. The same is true of your eye balls-- notice how eyes tend to dart, not move smoothly. anyhow, when animating eye brows i will make the cushion drawing very close in spacing and not last long. in other words it you are moving from 1 to 7 i would make 3 and 5 3rds. as always, i have to warn that this is NOT to be used all the time but generally, for natural eye brows this works great.
i suppose that's enough for now everyone, stay tuned and i hope to write a lot more this week than i did last week. cheers!
Posted by Matt Williames at 7:04 PM 5 comments

AHHHHH, the old days of feature animation. This whole last week you've probably noticed that i've be quite absent. well, it was a real busy week with a lot of early mornings. I've been back at Warner Brothers Animation this week. and honestly i am thankful for the pay but the work is slightly boring. I've been doing Character Layouts, and in TV it's all about quantity NOT quality. So, i've been thinking back to those greats not so distant days
when i got paid to work on features. This photo right below is of the Looney Tunes: Back in Action crew. I was 20 when i was working on that thing. I'm wearing the navy blue shirt with the yellow letters in the top right. Eric Goldberg is in the bottom center. 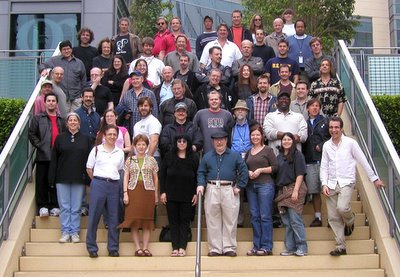 Here's another one of me watching a little approval session with Jeff Sergey and another animator. 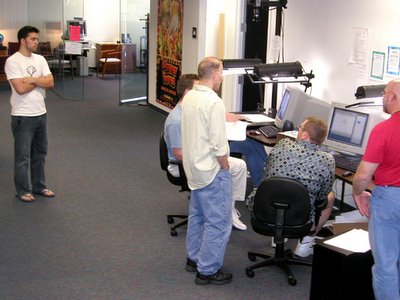 I'll try and dig up something cool to talk about soon... but for now i must jet. later!
Posted by Matt Williames at 2:50 PM 4 comments